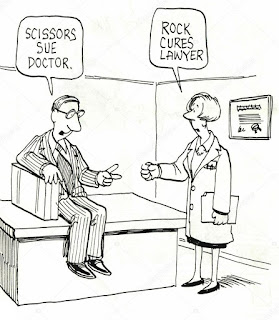 The Institute of Medicine found that “most people will suffer from at least one wrong or delayed medical diagnosis during their lifetime, according to the latest data. Americans experience about 12 million diagnostic errors a year.”

“Conservatively, the report found that 5 percent of US adults who seek outpatient care will experience a diagnostic error. Further, such errors are thought to contribute to 10 percent of patient deaths and 17 percent of adverse events in hospitals.”

In the article Is Misdiagnosis Inevitable, the reality of misdiagnosis is discussed with potential solutions through clinical decision support from Electronic Health Records.

Unfortunately, the term misdiagnosis is misused to include everything under the sun. It neglects the concepts of over-diagnosis, over-treatment, irrelevant diagnosis, and mostly that people the majority of the time get better without treatment. “Tincture of Time” solves most problems while potential erroneous treatment plans can pose harm and drive the Medical-Industrial Complex to more and more.

Assuming that the missed diagnosis has clinical relevance (affects patients not statistics) , it would be important to reduce these errors.

The IOM’s 1999 report said to “To Err Was Human”. Human beings probably have not evolved significantly since 1999 to fantasize that errors will not be made. The goal should be to limit critical errors by avoiding common recurrent mistakes.

The well-known ones are illegibility, allergic reaction, drug-drug interactions, lack of follow-up on abnormal tests that were ordered by someone, and systemic errors that create pressure to perform in unsafe environments. Consumerism and the public’s fantasy that everything can be figured out in 24 hours or less are also factors.

With respect to malpractice litigation, the acceptable miss rate on a patient in the United States is 0%. This cannot be achieved without endless unnecessary tests that may lead to unnecessary treatments that leave the patient in worse shape than the initial error.

One must remember that the concept of diagnosis itself derives from the diagnostic medical model:  symptoms examination/testing à diagnosis à diagnosis-based treatment.  There are inherent flaws in that model, especially as the field of potential diagnostic entities grows in its complexity and possibilities.  Consider immunotherapy for carcinomas.  There, the diagnostic possibilities have expanded exponentially because of nuances in genome delineation. Many other sub-specialties are following, each entity with its own specific therapeutic modality, and each with its own heavy price-tag.

What has (surprisingly) never been fully incorporated into the emergency medicine diagnostic model is the impact of time and extended clinical relationships.  That is, we discharge patients with a “diagnosis” which is not-uncommonly some vague re-interpretation of symptoms (e.g. “back pain,” “dizziness, vertigo”).  And the best outcome diagnostically, for us, is admission.  Why? Because, then the admitting physician is responsible for discovering the true nature of the disorder.
The next tier of outcome is arranged follow-up, in which a referral physician agrees to see the patient and continue the care as needed. A sub-tier to that is the more unreliable diagnostic plan of “return if worse” or better “return for a recheck” at a specified time. Finally there is the common discharge plan for diagnostic security:  “see your doctor if worse.”

The experienced physician accepts that his diagnostic acumen is sometimes on, sometimes off target, and so builds a measure of time into diagnostic equation.  If done well, there is no such thing as misdiagnosis, there are potential diagnoses, there are working diagnosis, but there is no “final” diagnosis until confirmed by time and further evaluation.

What can be done to align these competing forces to allow the “lonely practitioner” to get the diagnosis right? Perhaps creating clinical decision support (CDS) tools in the Electronic Health Record through artificial intelligence (AI) may help. Effective employment of this may be a decade away, and may require buy-in from the tech industry, which seems decades ahead. As one ED physician recently said to his enterprise system that was trying to speak to him: “shut up…..you’re no Siri.” When present, good AI will hopefully function as a real-time consultant to the provider with propositions for differential diagnoses, treatment plans, legitimate warnings, notifications that the data inputted may suggest another serious diagnosis, the tests you never looked at are on page 21, and the nursing notes show major discrepancies with the provider’s input.

Bottom line, the system presently works quite well but can be significantly improved. Misdiagnosis should be a term only applied to situations that cause real harm to an actual patient, and only if the full-force of diagnostic acumen (and time) has been applied.  Accomplishing non-misdiagnosis is difficult in our current system, of course.  But thankfully most cases usually takes care of themselves. Preventive care actually may be the long term solution for serious all-to-common self-inflicted illnesses. If, that is, you can get patient buy-in.
Posted by Unknown at 3:38 PM