Screen Savers as a Communication Tool

Almost every medical facility has multiple computers at multiple work stations. Each computer has a screen saver that is usually a name, advertisement, and or picture.

With the recent confusion at the Texas hospital about Ebola, it is a simple tool to enhance communications throughout the institution. Some hospitals have already posted announcements and schedules of meetings on them.

The next step would be to use the screen as a notification tool to all the staff. 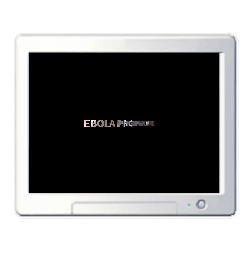 The utility is endless and can be easily programmed. Different computers with specific target audience can get different messages.  Add the screen saver as part of your system to ensure that everyone hopefully knows what is going on.

Instead of being reactive, this is a proactive step.
Posted by Unknown at 11:44 AM No comments:

Tyranny of the 24 Hour News Cycle

It does not take a university level course on marketing to see that news sources are more truthfully in the business of entertainment than in the business of accurate information dissemination.  If a “story” excites, titillates, captures the mind, it is successful, despite its truth.  To observers, the current mode of public information distribution seems more like onscreen supermarket tabloids than the down-to-earth news given by respectful predecessors like Walter Cronkite, Jules Bergman, Chet Huntley, and David Brinkley.  These days, entertainment trumps accurate reporting.
The problems inherent within an insatiable need for more information at breakneck speed include lack of verification, HYPE!, misinformation, professional “talking heads,” speculation without sufficient data, and the race to be “First”.  After all first-and-foremost means top entertainer.  The list of such inaccuracy generating issues could go on and on.

In the 24/7 cycle, people or perhaps institutions are blamed or praised at the outset, according to the political bent of the station. Then, political correctness (either right-wing or left-wing) is added to the mix; now we have an attention-getting story that can be repeated every 15 minutes for 24-72 hours or until some new disaster pops up.  Advertising is sold hand-over-fist according to the ratings that any news show gathers through it’s stage show.

The Texas Hospital Ebola exposure presents a good example of how the blame game feeds the fire of the news-show/entertainment industry. Here, the hospital, nurses, physicians, Emergency Department, Electronic Health Record, Homeland Security,  and the TSA were all good candidates to blame, and each was hit sequentially according to the texture of the moment. Rather than taking a systematic review of the entire process, a tangible scapegoat was needed, and someone, some individual, had to have failed, rather than the system as an interconnected entity. However, this was instead, a system failure. When you blame an individual for a system problem, finger pointing immediately occurs. “It was not my fault, but was a result of someone else’s incompetence (certainly not mine!).”  That generates interest, attention from the masses, and channel habits, being psychologically less boring than saying “Hey, look, the system just failed.” There is nothing more dull or tedious for the human psyche than to have no one to blame.
Gun control, abortion, immigrations, health care, race, and welfare stories always lead to an immediate pro or con response without analyzing the individual merits of the case. For the sake of the modesty of this blog, nothing further will be said regarding the visual appeal of the female news anchors that always seem to appear.  In real life, there just are not that many scantily dressed beautiful women in one place. Seriously? There must be an average looking female journalist somewhere.  But, after all, entertainment is entertainment.  Just saying.

As one watches Fox, CNN, MSNBC, PBS, and any number of other news stations, their political viewpoint is easily ascertained. Depending on the channel, the CDC was either on top of the situation or “hiding the truth”. Even with talk radio, expected to be along partisan lines, it is easy to hear an underlying “chronic agenda” that is hardly impartial.
In conclusion, the massive appetite of the 24 hours news cycle does not reflect an overall common sense collective approach to solving problems. Information, provided in this way, and blanketing the media, is thus a major contributing factor toward the endless divisiveness in our society. Would it not be healthier to allow the average person to sit on different sides of an issue, even retaining a bit of ambivalence, without the inherent name calling that derides an absence of political correctness from one or the other perspectives. Occasionally, a reasonable compromise can be a good thing.

Posted by Unknown at 1:32 PM No comments:

As the Ebola epidemic shows no signs of dissipating, it is probably time to change some common greeting customs. The standard greetings depending on location, culture, and state of intoxication include handshakes, hugs, kissing both cheeks, chest “bumps”, high five, low five, and multiple variations on above. 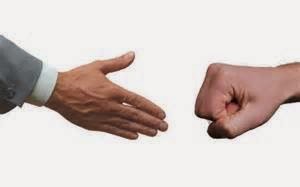 With skin-to-skin contact, spread of the virus is possible but unlikely, as the infected contact is thought to require high illness severity accompanied by a high viral load.  To avoid transmission, but continue the formalities of social greeting, the suggestion has been made to switch to the lightly closed fist “hand-bump.”


There are two variations of this:


1.      The covered hand (where you pull your clothing over your fist and then make contact.)


2.      The uncovered hand where you feign actual contact, gesture, miss, and retain the psycho/social effect.


The Japanese culture with traditional bowing has already solved this dilemma. Not sure that this will translate to a more macho western culture.


There has been much controversy in the news media about the proper way of avoiding the spread of Ebola worldwide. The options of travel bans, closing air traffic, quarantine, and testing stimulate expert opinion. These expert opinions are extremely varied and seem to be based on political orientation to avoid panic and medical need according to the CDC based on medical evidence according to epidemiological techniques. At the present, there are shifting recommendations on a daily basis.  The 24-hour news cycle, political correctness, and true lack of knowledge makes it look like there is no black or white answers.


In large part, these shifts reflect an imperfect science regarding the transmission of this virus.  The ease with which it spreads in some situations (e.g. to healthcare workers) is offset by a variable period of contagion (thought—but not guaranteed-to maximize at 21 days), an ill-defined onset of viral shedding (headache? myalgias? rhinorrhea? low-grade fever?), a degree of permeability to protective gear that is almost uncanny, as well as an unknown capacity to mutate and circumvent measures being established.


Moreover, effective treatment is now generally agreed to depend on one dimension:  supportive care with adequate hydration and electrolytes.  It is almost cholera-like, and electrolyte depletion is now thought to be the final common pathway to death.  Quite likely, when the analytics are complete, they will show that most of the deaths in W. Africa could have been prevented with simple IV hydration.  Not to mention that much of the transmission there could have been averted by common-sense burial practices*, along with mitigation of unnecessary fear.  Yet, in those countries, at the height of the disease, those infected (including many healthcare workers) were sent to the back (rooms, tents, fields) and left alone, where they, of course, died.  Treatments such as convalescent serum, plasma, ZMapp were, in all successful cases, given along with good supportive care, and full hydration. Hence, it was, to any cogent medical mind, the hydration and support that made the difference.  Since cases are now being shown to recover just with fluids, the other “treatments” were clearly superfluous.


The probable truth is that there are no straightforward solutions to the problem of stopping transmission.  They become, and are becoming more and more, epidemiologic and political decisions.  The common sense approach of attacking and isolating the problem at the source through quarantine and support sounds the best but may not be the whole answer.


The Ebola epidemic will ultimately probably be controlled or burn-out itself and life will go on. In a prior blog (Life Imitates Art) it was stated that is really hard to get things right without the necessary experience. The fact that multiple communities and countries are trying different things will allow the analysts to come up with a “game plan” in the future for the next uncontrolled world-wide pandemic.  We should consider the present infection as a “test” of our preparedness and make the appropriate adjustments.


*In one well-known case, when it was thought the outbreak was just about under control, the body of a woman who died from Ebola was taken from the hospital under gunpoint by relatives.  Her remains were taken to their home, and the practice of full contact mourning caused a resurgent outbreak in the area.
Posted by Unknown at 1:24 PM No comments: