Have You Lost That Burning Desire?

Professional, occupational or job burnout is short-term exhaustion, lack of enthusiasm/motivation, feeling drained and most times there is negative emotions and cynical behavior that result in reduced professional efficacy within the workplace.

The article Is Technology to Blame for Physician Burnout analyzes the Medscape Physician Lifestyle Report, which states the electronic health record is a factor in physician burnout.  The data identifies three key factors: insufficient income due to reimbursement cuts, extended hours to maintain the status quo, and the negative impact of technology (time, money, and more staff).  When is the last time you had someone smile when the acronym EHR is mentioned??

It is no secret that physicians, as well as all other health-care providers, have been endlessly bombarded with massive political, economic, and social change.  Simply for survival, most every physician and provider has had to rethink priorities just to keep afloat.

The EHR was once touted as a solution to the chaos in health-care. Instead of being an answer, it has become an added burden for providers'.  Why?  One thing, lack of standardization has created an additional unknown in a providers' environment.  What problems is this thing going to give  me today?  Even physicians who practice every day in the same location, are face with technological impediments.  Those who work at different sites, often have to readjust to a different interface on the fly.  Such impediments include surprise updates, new facility and regulatory requirements, restructured workflows, unpredictable interfaces, and software that is anything but friendly. Add to all that the failed pledge of interoperability- my system will talk with your system- and it is easy to see why the EHR simply has not lived up to its promise--Not even close!  These studies show that a majority of physicians have felt that the presence of EHR technology decreased face-to-face time and the ability to see patients, while only a minority felt that the quality of their practice was improved.

Burnout is a major potential problem for the health-care system, for patient care as well as for the individual provider that may fall prey.  In this environment, the EHR is a natural scapegoat for the deeply entrenched ills of the system.  With the rapidly aging physician population, once can understand that doctors are expressing a desire to get out of the click race.  Hopefully, the next generation EHR will be better than the current one.  Maybe the psychological and emotional contribution to the specter of burnout will perhaps lessen, if not disappear.

Posted by Unknown at 2:54 PM No comments:

A Blast from the Past!

In December of 2012, we posted the Changing Paradigm for Outpatient Care blog.  Reading through Emergency Medicine News latest February 2015 magazine this afternoon, I found a blast from the past!  The Special Report: ED as Hub of Healthcare discusses why folks go to the emergency department for health-care.  Read both the article and the blog post below for some insight.  Enjoy!


December 3, 2012: The Changing Paradigm for Outpatient Care
The present model has the primary care physician as the provider and gatekeeper of patient care. They evaluate the patient, obtain consultation, admit to the hospital (the hospitalists have taken over this role), and are the general coordinators of care. However, this model in theory works well; it has proven to be ineffective. This is no criticism of the concept but the complexity of modern medicine has made this very difficult for the average family practice unit.

The family physician is supposed be the “gatekeeper” of resources and keep people out of other venues like Emergency Departments and urgent cares.

The problem is that the general public has voted “with their feet” that they prefer the family doctor when they are well, but the Emergency Department when they perceive themselves to be quite ill and the urgent care for quick, convenient care.  Call any doctor’s office and the first non-human response is: “If this is an EMERGENCY call 911 or go to the nearest Emergency Department.”

Almost every ED has the built-in infrastructure to accommodate large number of patients which could be expanded. These are centrally located in most communities and already are the de facto safety net of the United States.

Make the ED the central piece of an organized system of emergency department, urgent care, family physicians with an integrated use of consultants.

Advantages are:
Posted by Unknown at 3:01 PM No comments:

Using the Electronic Medical Record as a Teaching Tool

Tech-savvy first-year medical students are staying one step ahead with an EMR system.  The electronic medical record is charting a new course by including as part of the medical curriculum.  The potential added-value is relevant to medical students, nurse practitioners, physician assistants, and physicians.

The electronic medical record can guide one through the assessment of the patient by creating a back-round of appropriate questions to focus in on the problem.  The record can theoretically provide the necessary historical information to aid in the diagnostic and treatment process. 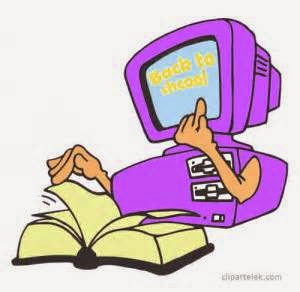 The EHR can link in real-tie with outside data sources to provide real-time comprehensive information.  Artificial intelligence that provides clinical guidance and support is in its infancy, but will someday be available.

How can you take advantage of these features?
A sophisticated clinically useful EHR can aid providers at all levels, training or experience.  Teaching and learning is a life-long process.
Posted by Unknown at 12:04 PM No comments:

Emergence of the Electronic Scribe

The definition of a scribe is a person who writes books or documents by hand as a profession ad helps keep track of records.  This profession is found in all literate cultures and lost most of its importance with the invention of printing press. 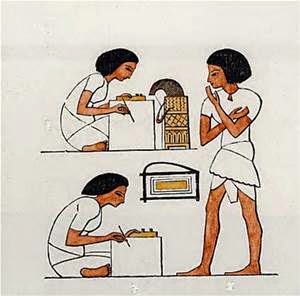 The modern medical scribe is more a data jockey than a hand writer.  With the advent and proliferation of the Electronic Health Record (EHR), providers are forced to add more people power to document their records.  Originally most records were handwritten and/or dictated.  The downsides of handwriting are illegibility, incoherence, and lack of completeness.  Dictated report are often incoherent and filled with mistakes.

The EHR solution where the provider would type organized, logical data collection giving the document a realistic reflection of a clinical interaction.

This assumption unfortunately does not translate into the reality of time constraints, lack of computer skills and difficult user platforms.  Providers became data entry clerks and charts are written in "computereeze".

Administrators and providers needed solutions.  Thus was born the medical scribe- an ancient Egyptian worker to document the history of what was happening.  Scribes follow the provider and inputs data into the EHR.  In lieu of using a scribe, voice activated technology.  The provider can dictate key information directly in the EHR.  Both of these solutions still have down sides such as incoherence and providers lack of computer skills, but are better than the third option of overtime typing/clicking everything yourself. 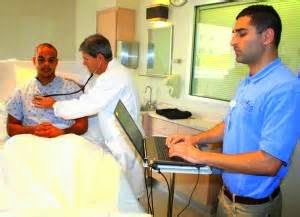 The negatives of scribes are costs, potential lack of accuracy during the filtering process and fundamental distaste of hiring more people to function normally.  EHR technology was meant to simplify the process, not exponentially complicate it.  The creation of the EHR has also created an unfunded mandate to provide more information to the government with the goal of solving human interactions by computers.  Computers are tremendous assistants, but rarely solve interpersonal relationships with multiple variables like provider patient interactions.

Scribes have evolved into "clickers of data" and probably do not handwrite anymore.  There should be a better solution in the modern era.
Posted by Unknown at 1:30 PM No comments:

Back by populate demand.  The newswires have been blowing up lately with article about medical scribes and data governance.  A good article to reference this issue is Will Medical Scribes Limit Innovation in HIM, EHR Documentation?  It addresses the rise of medical scribes, EHRs, health information management (HIM) and data governance.  Take a look at the article and re-read the blog from 2013 written on the subject.  Enjoy!﻿ 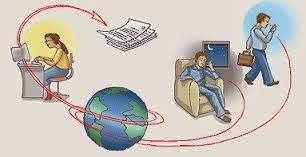 This is an interesting problem with strong advocates on both side of the equation.

After going to the recent ACEP conference, it was apparent that scribe companies are coming "Out of the Woodwork" to offset the labor intensive enterprise Electronic Health Records being imposed on most emergency departments.  Scribes cost approximately $12 - $18 per hour each.  To offset these costs, the provider must see 2 - 3 more patient per shift.  At this point with a general reduction of 20% of productivity per provider, this is not happening overall.  Providers are struggling to stay even.  In institutions where a scribe can function as a medical assistant, a "Go-For", data acquirer from the old medical records, interact with the patients, and print discharge instructions and prescriptions, the extra work is a plus.  This is how most urgent cares function with an all-encompassing medical assistant with multiple roles.  In institutions where the scribe just inputs what the provider states, they are expensive transcriptionists and typists.

Voice Activated technology is an extremely efficient alternative to transcription at much lower overall costs. The provider can dictate key components of the history of present illness and the assessment and plan- medical decision making sections of the records.  This creates a unique non-cookie-cutter chart which helps the private MD, consultants, and your own colleagues, if the patient returns for follow-up.  The problems come in where the EHR is not directly designed without a lot of work-arounds to allow easy dictation.  The initial cost is $1,500 per provider, but transcription costs $7 - $8 chart and the money is regained in time with increased productivity.

Which one is recommended?  It depends on the work flow of the ED, the EHR, and the personality of the provider.  My personal preference is a user-friendly EHR and VAT, so you can take the savings to buy more physician assistant and/or nurse practitioner FTE's.  This hopefully will lead to increased throughput, higher revenues, and increased patient and administration satisfaction.  If my scribe is an all-purpose medical assistant, this would make a reasonable alternative.